Some time ago I stumbled upon a amazing blog, a magic place of creations, with stories for both eye and soul. I don't remember how I got there, but presumably by forces of moon and stars, more than numbers ticking away on the electronic web. A gate-builder between worlds, and multi-talented artist is she, Rima Staines, and you can find her blog here. 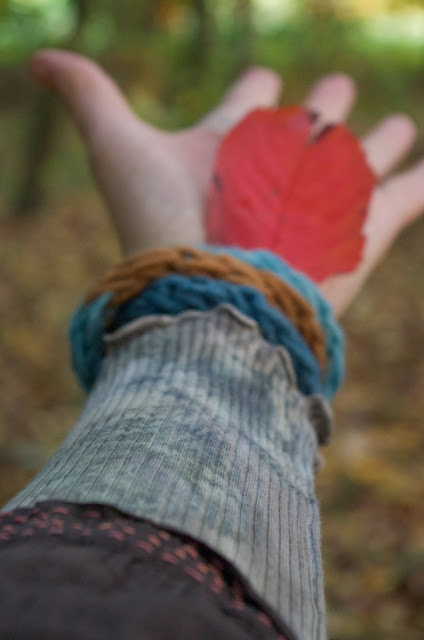 What caught my eye back then, was this symbol, a wheel with rooted tree-people with raised fists, and words trailing along its outlines. It is called Rise & Root, and Rima urges you to take it and run, and do with it what you like. According to her, this is a seed of revolution, a revolution of hope and solidarity. (Please go there, and read her post). A seed most certainly flew over the sea from Dartmoor to this small island of mine, and quietly settled itself into strange and unknown soil, where it has been hibernating until recently. In this quite flegmatic soil - which is soil consisting mostly of dark, fat clay - the seed has undergone some sort of transformation. The revolution has moved from suburbs, pavements and shopping malls, it has made an offshoot, that grows outside the city, away from public toilets and chrome-and-concrete, it burgeons forth and grows where there is green and quiet (except for the sheep). But it is still angry, there are still raised fists to the fight, and roots in the earth! 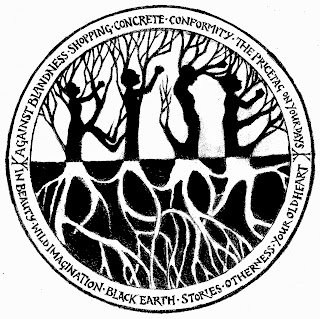 The word revolution is almost universal, most languages has got the exact same word, just with different and charming ways of pronouncing.  It can also be spelled in numerous ways, for instance: transformation, uprising, shift, change and reformation.
The country in which I live, has got an insane amount of waste matters,  one of the highest levels of consumptions per inhabitant of all, in the whole, wide world. Reusing is almost an unknown concept here, we have these big refuse disposal plants, where everything is burned to ashes; plant/organic matters as well as furniture, clothes and tons and tons of plastic. There is truth in Shakespeare's Hamlet: Something is rotten in the state of Denmark! 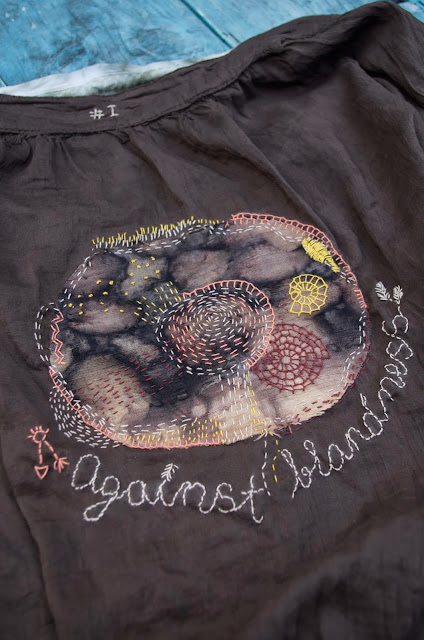 So this quiet revolution is (also) about curbing consumption, transform what we've already got (plenty of). Make changings with the powers of our imaginations, rather than with spending power. Being inspired by our surroundings and Mother Nature, rather than glossy magazines and stupid commercials. The thing is, it needs to be visible in some way, there must be words or drawings or symbols of some sort. It needs statements. Speak out loud your support for Mother Earth! - Speak out for BEAUTY, WILD IMAGINATION, BLACK EARTH, STORIES, OTHERNESS and YOUR OLD HEART. 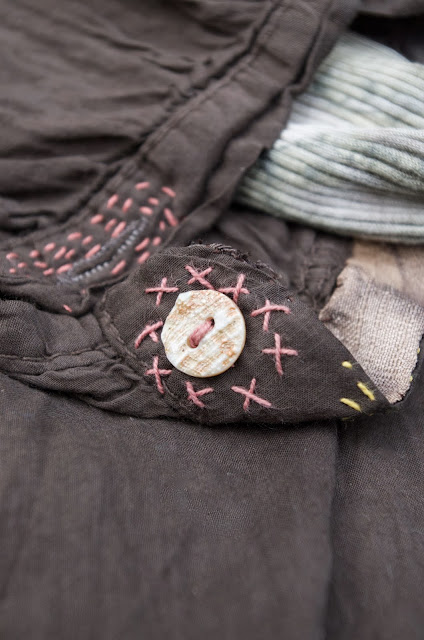 It's what I have been doing for years, as a matter of fact. I haven't bought a single piece of new clothes for about 7 years (except for underwear, of which I buy the organically grown kind). I mend, (natural) dye and reuse as much as I can. The new thing is, that now it's also a statement as well as a rebellion. I might dye my hair green and make weird hairdos - or not. It may not stick out or seem provoking in any way, but it is - with guarantee - an genuine rebellion! I like Rise & Root a lot, but how about 'Tread light - Dye hard'? I'm open for suggestions! 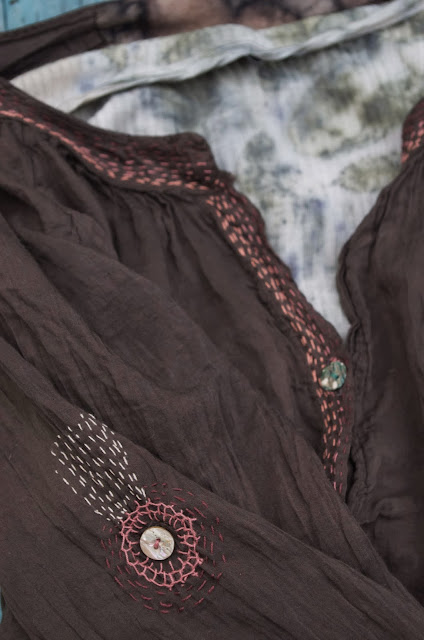 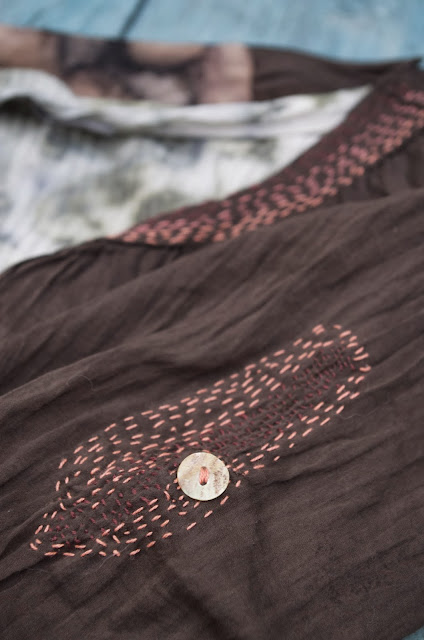 So, this is #1 - or 'Against Blandness', a silk-cotton shirt that has travelled a long way in a plastic bag, along with a lot of other stuff. Unknown number of nice people sending the bag forth, so the origin is unidentified. It was undyed, and in need of some mending. I dyed it with oak; bark & galls, and dipped it in rusty water. Replaced the plastic buttons with sea shell dittos from My Big Box of Hoarded Oddities. Sewed on some scraps of eco dyed fabric both inside and out, and stitched a bit all around with thrifted threads.
Simple, and rather understated, I know, but I'm a Scandinavian, so this is how it goes. 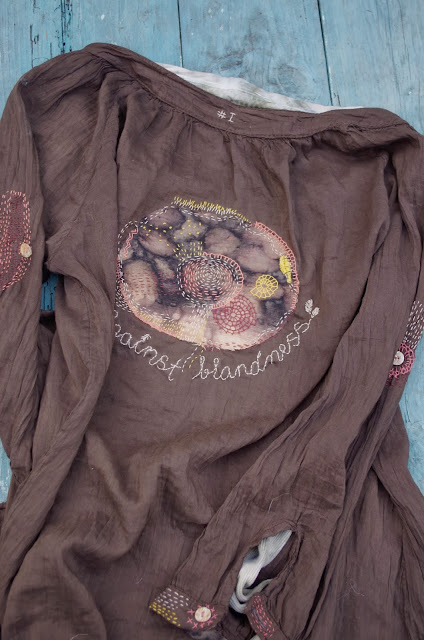 (The following pictures are taken by my 9 yo son, who also made my jewellery) 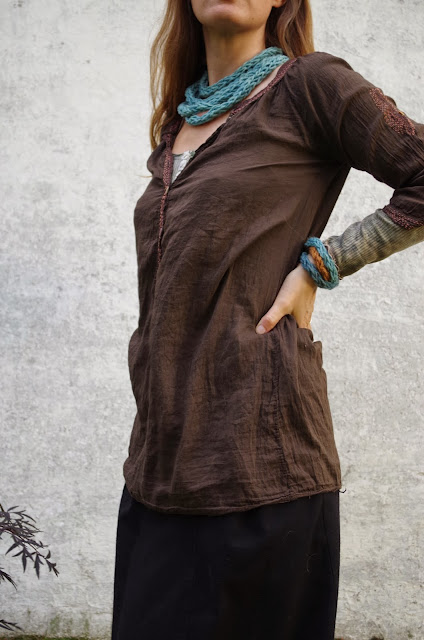 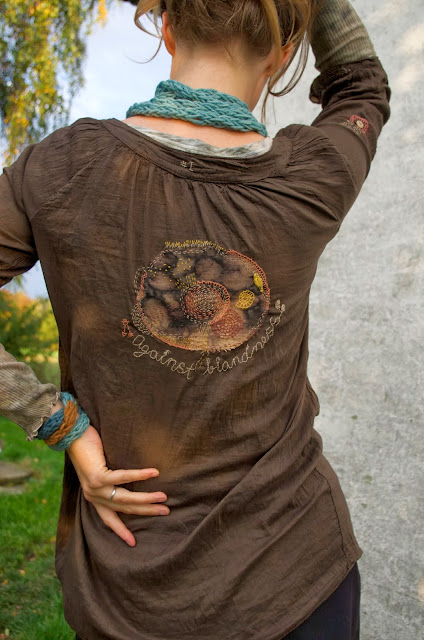 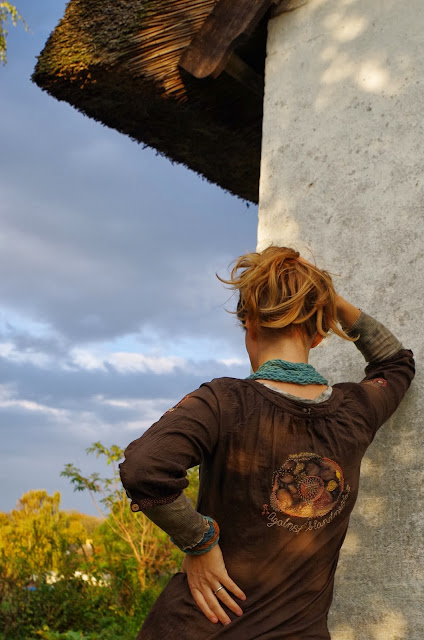 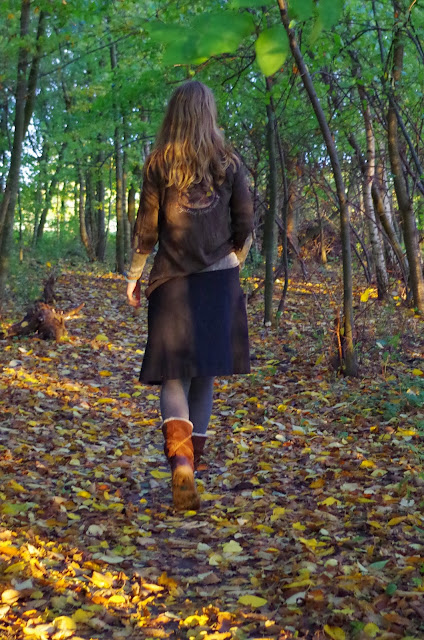 Well, I'd love you to join me! In any way you like, in any form it might take. If you got some ideas or inspiration to share, please do!! Rise & Root!!
Posted by Mona at 00:00 9 comments:

The best kind of days

The best way to spend a couple of days with a friend? Well, yes, I'm sure you guessed it: Grabbing a basket, donning rubber boots & woolen hats, going to our local 'wilderness', wandering, talking, laughing, gathering leaves, wrapping leaves in cloth ... 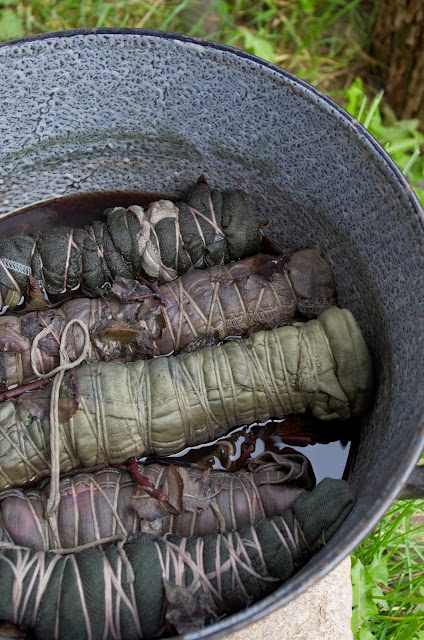 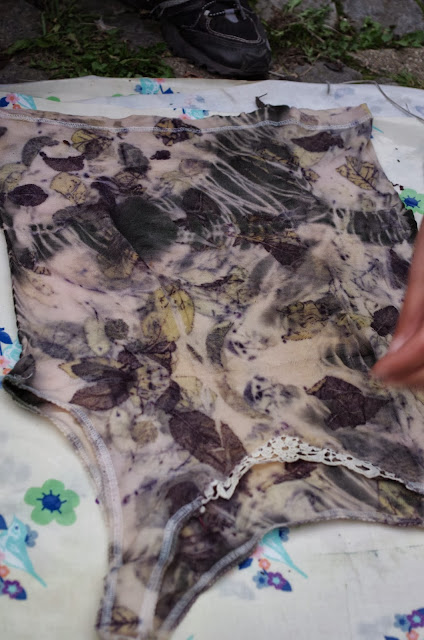 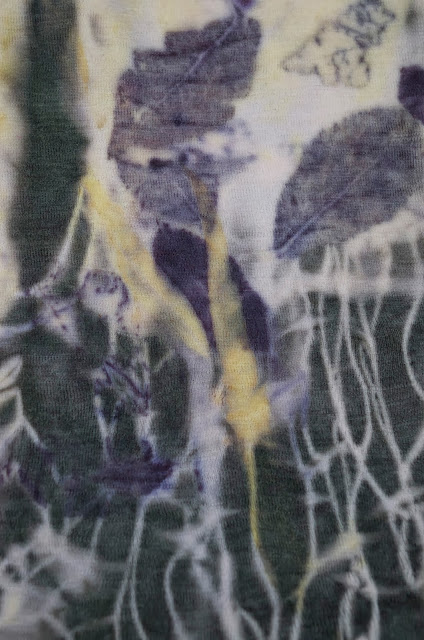 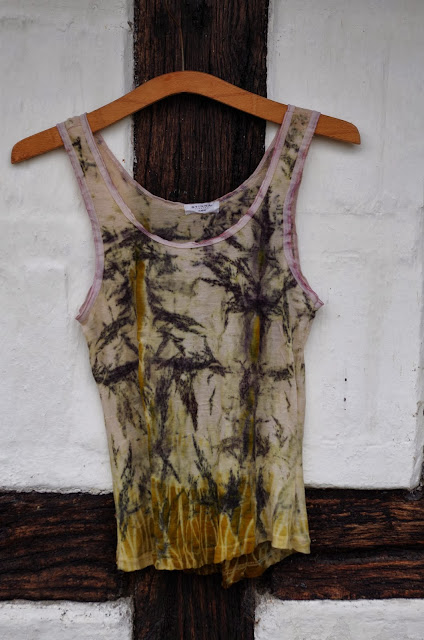 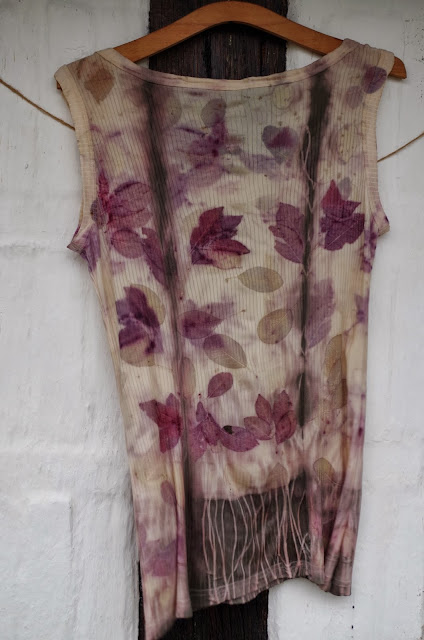 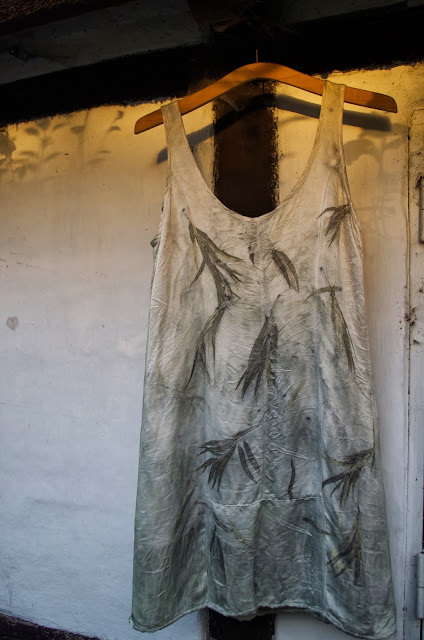 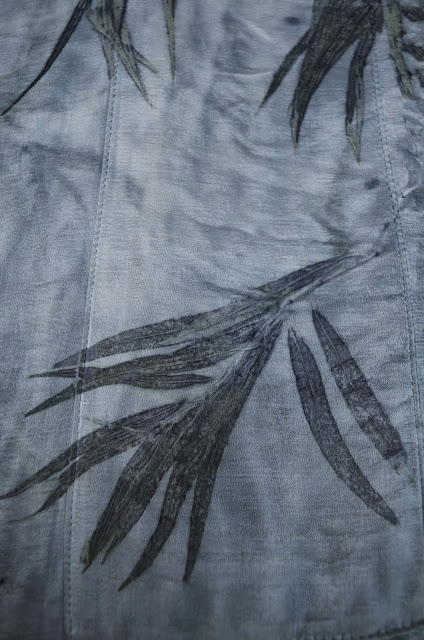 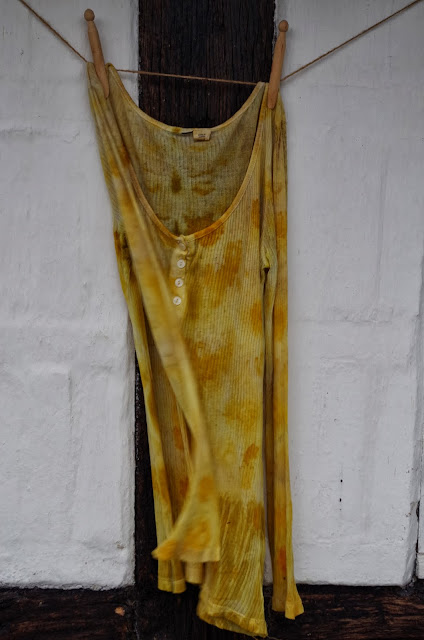 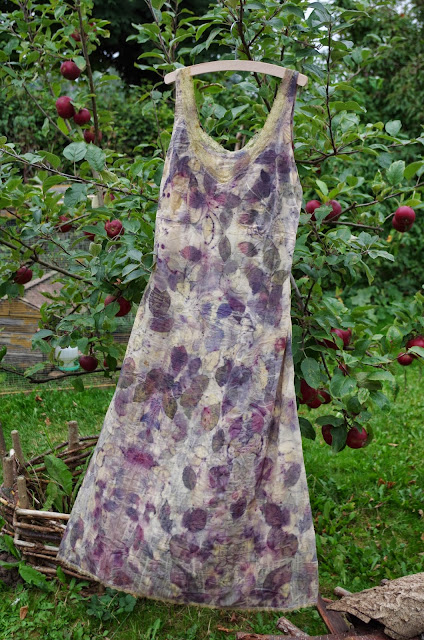 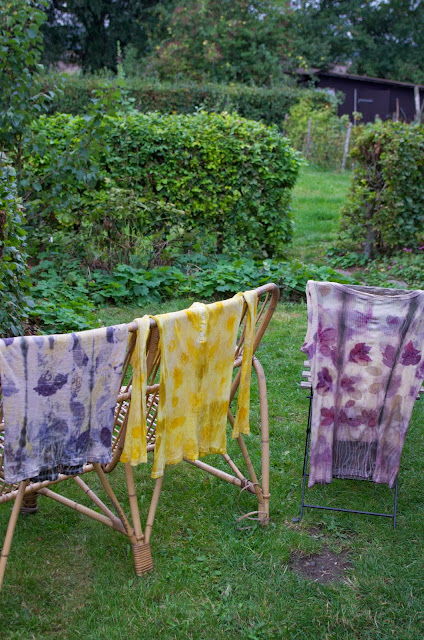 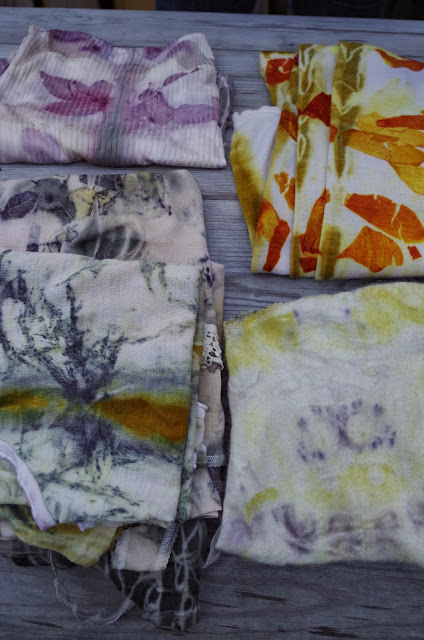 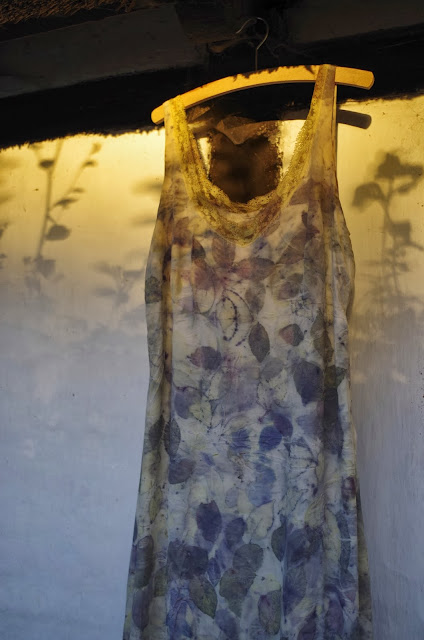 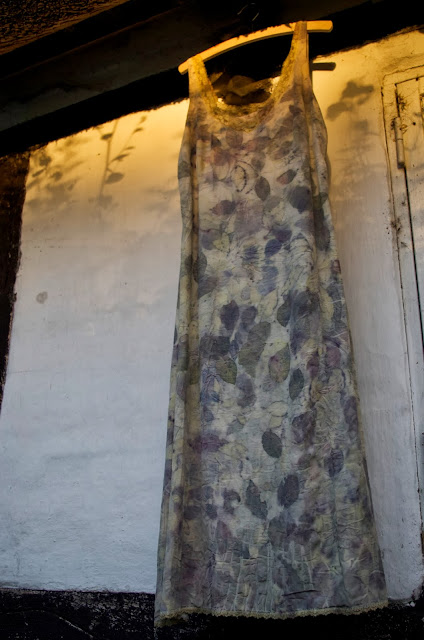 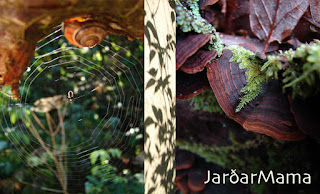 about all the other things in life